Free For All Nurses Expand your skills with “Care of the Acutely Ill Pediatric Patient Respiratory Bundle”
Read the results of our latest national nurse work environments study, and see why Healthy Work Environments matter in this critical time.
Be exam-ready: Prepare for success with practice exams featuring hundreds of questions and on-the-go access.
Nursing Excellence Your Stories We're Gonna Be OK 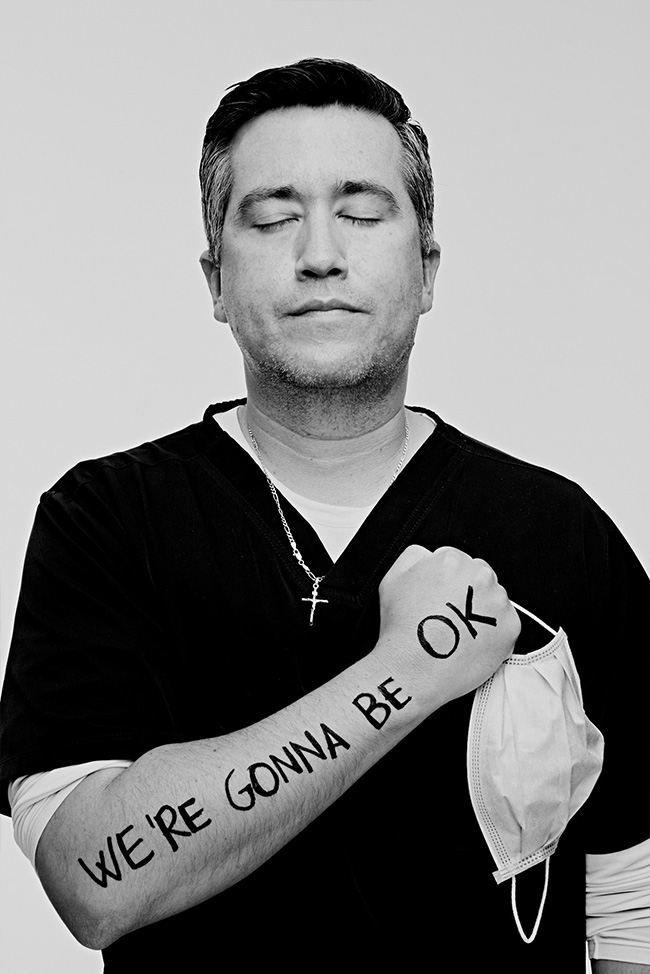 I think this is an opportunity for all of us to realize we need each other, and that we're going to be okay.

As a kid, I always dreamed of being a doctor.

My older cousin used to talk about wanting to be a doctor, and, when you're little, sometimes you have that one older brother or older cousin you look up to. He was that person for me and I wanted to follow in his footsteps. So, I guess you could say that the dream of becoming a physician started because of him. He didn’t end up becoming a doctor, but my passion for it grew as I got older.

The journey was tough, a lot tougher than I ever imagined it would be. My lackluster Freshman year of college didn’t help much. It made it difficult for me to get into med school in the States. After being turned away more times than I cared to count, I remembered that there were some excellent medical schools in Latin America. In fact, I knew some people that had studied medicine abroad and then had come back to practice in the States. I wanted to get started. I didn’t want to waste any more time. So, I decided to go to school in Mexico.

Those years were some of the best of my life. I made lifelong friends and I grew up. I learned a lot about who I was and who I wanted to be. I knew that I was on the right path. But, I had no idea how crooked and long the path would be. The next seven years of my life took me from Mexico to Miami to Georgia to the Carribean and back home. All part of my medical training and all filled with one failure after another. I could never pass the medical boards. I took them multiple times and came close but could never quite get it done. One day, I received a call from the Dean of my school who had called to tell me “Irving, look. I know you've been doing this for a while, and I admire your persistence, but I think it's time to consider a change.” I knew he was right.

I was devastated, scared, lost, and angry. I had no idea what to do next. I had dedicated so much time to a dream that was now gone. And, I had no “plan B.”

So, I did what I had always done. I leaned on my faith. I grew up in a very strong, Catholic, Latin American family. And, three things were always emphasized as I was growing up - God, love, and perseverance. Because of this my relationship with God had always been strong. But during this period of my life, it was tested. I was angry. I was angry at Him. But, I didn’t want to admit it. I didn’t think angry at God was something I could be. I mean, He’s God. So I prayed every single day for clarity and for a way to get my life back on track. But, behind my prayers were emotions of resentment and frustration towards someone who I thought I deserved more from.

Then, one night, I had a dream. I never remember my dreams. But, I’ll never forget this one for as long as I live. In this dream I was walking into a building, and as I approached the main hall I remember seeing a line of medical students in a single file leading into an office. One by one, they would walk into the office and collect a piece of paper from a doctor sitting behind a desk. On the paper it said whether or not they would become a doctor. When it was my turn, I took the piece of paper and was shocked to see that I would not be moving on. Standing next to the man handing out the verdict was another physician who I didn’t know, but whose appearance I recognized. He grabbed me by the arm and walked me out of the office. And, as we were walking out he told me “You know, I always knew you wouldn’t make it.”

This infuriated me. And I said, “Why? I can't believe you. You let me spend all of this time, all of these years, all of this hard work, all of the things that I've sacrificed, my relationship..All this debt…And you always knew? Why?” All of these thoughts that had been eating me up inside, but that I hadn’t had the courage to express in prayer I spilled out to Him in my dream. When I was done yelling, He said nothing at first. He started to walk away and towards a nearby elevator. Then he stopped, turned around to look at me, and said, “You and me, we're gonna be alright.” And then he walked into the elevator, turned around, and smiled. The elevator doors closed and I woke up. And, I mean, I woke up. I sat up straight in my bed and couldn’t go back to sleep.

Today, I am a nurse. I’ve come to realize that the things that bring me the most joy in caring for patients are things that are more fully experienced through the nursing profession. I wouldn't have been fulfilled as a person or as a professional if I had become a doctor. Medicine wouldn't be what it is without physicians and what they contribute. After experiencing just a small fraction of what they go through, I have great respect for what they do. But, I have also discovered that what nurses give to patients is something that can't be compared. As a nurse, you know your patient because you're there next to them, sitting by their bedside, 12 hours a day; sometimes three, four or five days in a row. There is often a bond and a trust that is formed that becomes a huge part of the healing process when a patient is feeling scared or overwhelmed.

Throughout this entire pandemic, the hardest thing to see has been the look and feeling of loneliness and fear in the eyes of a patient who can’t see or speak to their loved ones. I especially remember this one man who was on the verge of tears when I began to speak to him in Spanish because he couldn’t speak English and didn’t understand what the rest of the medical team was telling him. As I was making my way out of his room, he asked me, “You’re not going to leave me alone, right? You’re not going to leave me here alone?” I turned around, grabbed his hand and told him, “No papa, I’m not going to leave you alone. We are not going to leave you alone. We are here for you.” That has been the hardest part of all of this. Many times, I’ve thought of my own family and of what I would do if one of them were in this situation. I have no idea what I would do.

But, despite the many sad stories that we’ve all heard and experienced during these last few months, we have seen so much good. You see people reaching out to other people. The need to be around other people, to talk to other people. I mean, for God's sake, you see people on YouTube having sing-alongs on balconies; people who on any other day at any other time in their lives might not even say hello. It makes me think - God is always there, and there's always something good that we can get from and bring out of even the most difficult circumstances.

I think this is an opportunity for all of us to realize how much we need each other. The reason we are here on this Earth is to enrich lives. It’s a reality that was never clearer than it is today. It’s a truth that I may have never gotten the chance to experience first hand if I hadn’t been blessed enough to fail at my dream and stumble upon the dream that God had for me.

I think God has a plan for each and every one of us. The plan is always there, but whether you reach it or not depends on what you choose. I thought I had my path laid out in front of me. But He had a different plan. It took Him saying, “Hey, knucklehead, stop. This isn't for you, man.” to wake me up. Eventually, we get to where we're supposed to be. How long it takes us is based on how willing we are to accept that we are not in control.

That presence—whatever you want to call it, I call it God—that love, that desire for good to happen in all of our lives, and for good to exist in this world, is there and it always will be. Just like in my dream, even through the uncertainty of these times and the feeling of sorrow for those who have been lost, we’re gonna be alright. We’re gonna be OK!